Not much distinguishes one town from the next along Interstate 540 in northwest Arkansas. From north to south along the flat terrain, Bentonville, Springdale, and Fayetteville come and go in waves of corporate office parks—this is Wal-Mart’s home turf, and other companies have sprung up here, too. Look out the wrong side of the car and you might miss St. Nicholas Eastern Orthodox Church just outside of Springdale, tucked among other houses of worship that could pass for overstock furniture stores.

St. Nicholas is starkly unlike the others. Fayetteville-based architect Marlon Blackwell converted a metal shed—a form so frequently plunked down here it’s practically indigenous—into a 3,600-square-foot local icon. This is a fitting gesture for a denomination that venerates its own icons: In the sanctuary, parishioners pray in front of the iconostasis, a row of painted saints, angels, Christ, and the Virgin Mary, the links between heaven and earth. A boxy steeple extends from the church’s western elevation. Three splashes of color create a trinity: a slender red cross in the skylit tower, a yellow window on the southwest corner, and a blue window on the northwest corner. Blackwell calls the building a billboard.

He heard about St. Nicholas’s need for a new home from colleagues at the University of Arkansas, where he is a professor. The congregation was meeting in a run-down office space when a parishioner died and left money to the church, enough to help purchase three acres of land in front of a public park. A house and a 40-by-60-foot metal shed stood on the property.

The congregation couldn’t afford to build a brand new church. They may in about seven years, when the current mortgage is paid off and membership grows from 120 to a projected 200 parishioners. In the meantime, Jonathan Boelkins, project manager, says he and his team thought about tearing down the shed. “But it had structure and it had a roof, and so we thought, well, we’ll see what we can do with it,” he says. Boelkins and Blackwell wanted to give the building a presence from the road and, as Blackwell says, “give spirit form in the present.” They studied the history of Orthodox churches and found that their designs vary widely in the world: Each takes on a regional identity, rooted in its time, and St. Nicholas would be no different.

Deciding the shed could speak to its locale and simultaneously provide an exalted space, Blackwell sought a variance from the city, which usually prohibits the use of metal panels as a new building material. This was a chance to dignify a ubiquitous type and raise questions about architecture as a spiritual offering. “A lot of people are turning churches into metal buildings,” he says. “We turned a metal building into a church.”

The shed’s long axis ran north-south, but the Orthodox like to pray facing east. The architects added a narrow addition to the western elevation to create the narthex. They moved the front entrance to the western elevation and marked the interior entry to the sanctuary with a steeple. Focus in the sanctuary is on the iconostasis in front of the altar, where Father John Atchison, parish priest, performs the rituals of the service under a slot window that allows morning light to filter in.

Domes are important in Orthodox churches, but Blackwell didn’t want to disturb the flat roof. So he traded a couple cases of beer for a used satellite dish. The team skim-coated it with plaster and embedded it in the ceiling. “I joked to Father John, ‘You have a direct line to God now,’” says Blackwell. “And he said, ‘Yeah, but now it’s pointing down.’” The rest of the two-story building is spare. The original concrete floor remains in the fellowship hall, a meeting space separated from the sanctuary by a movable wall.

Modest though it is, St. Nicholas brings Blackwell’s office back to its roots after several big-budget projects farther from Fayetteville. They are working on an elegant store in Moshe Safdie’s new Crystal Bridges Museum in nearby Bentonville; a high school; a Montessori school; a renovation-addition to the University of Arkansas’s architecture school; and a cabin in the woods. “We can still make architecture anywhere, at any scale,” says Blackwell. “That’s been one of our missions: to say, hey, architecture can happen here.” 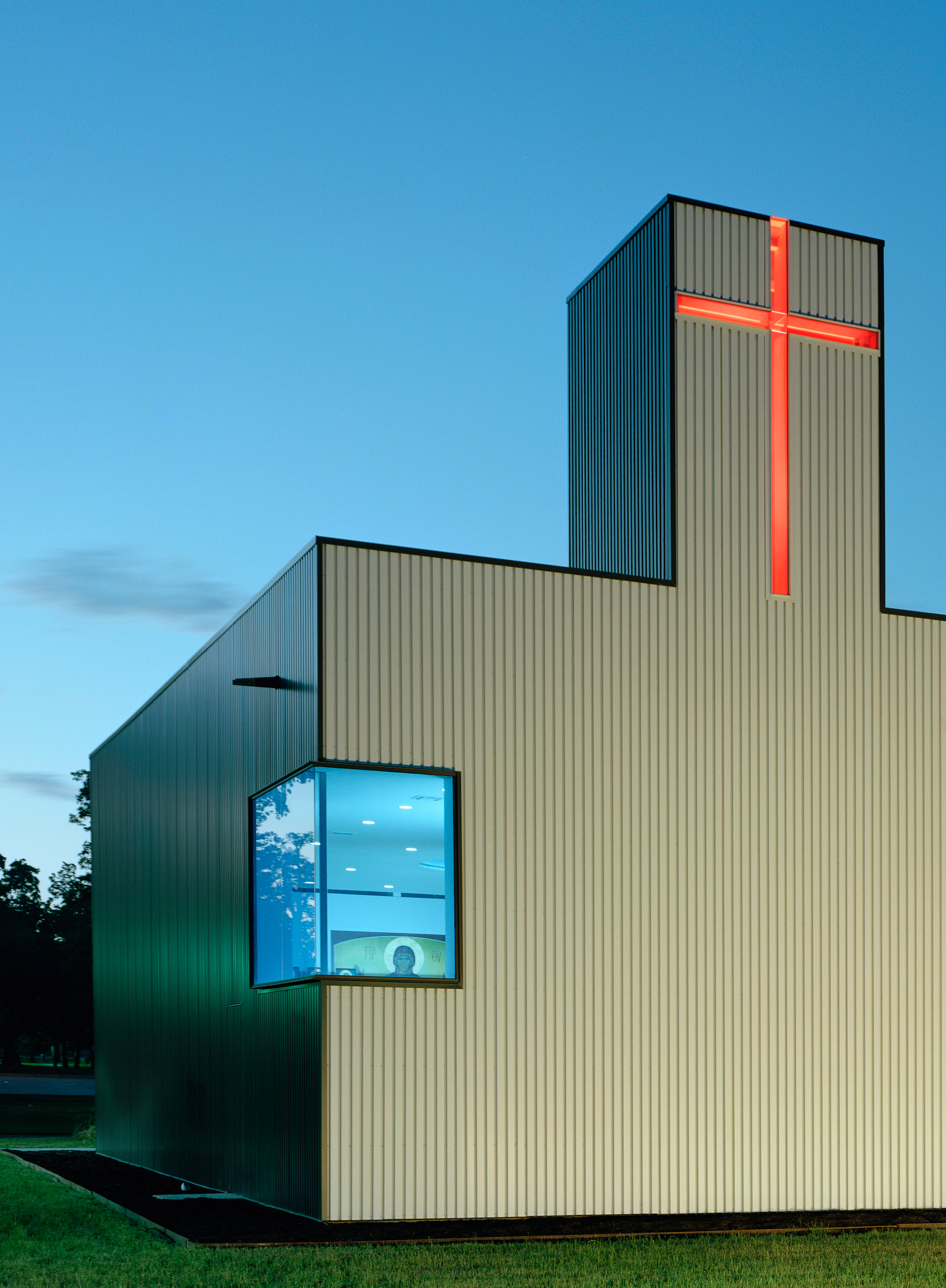 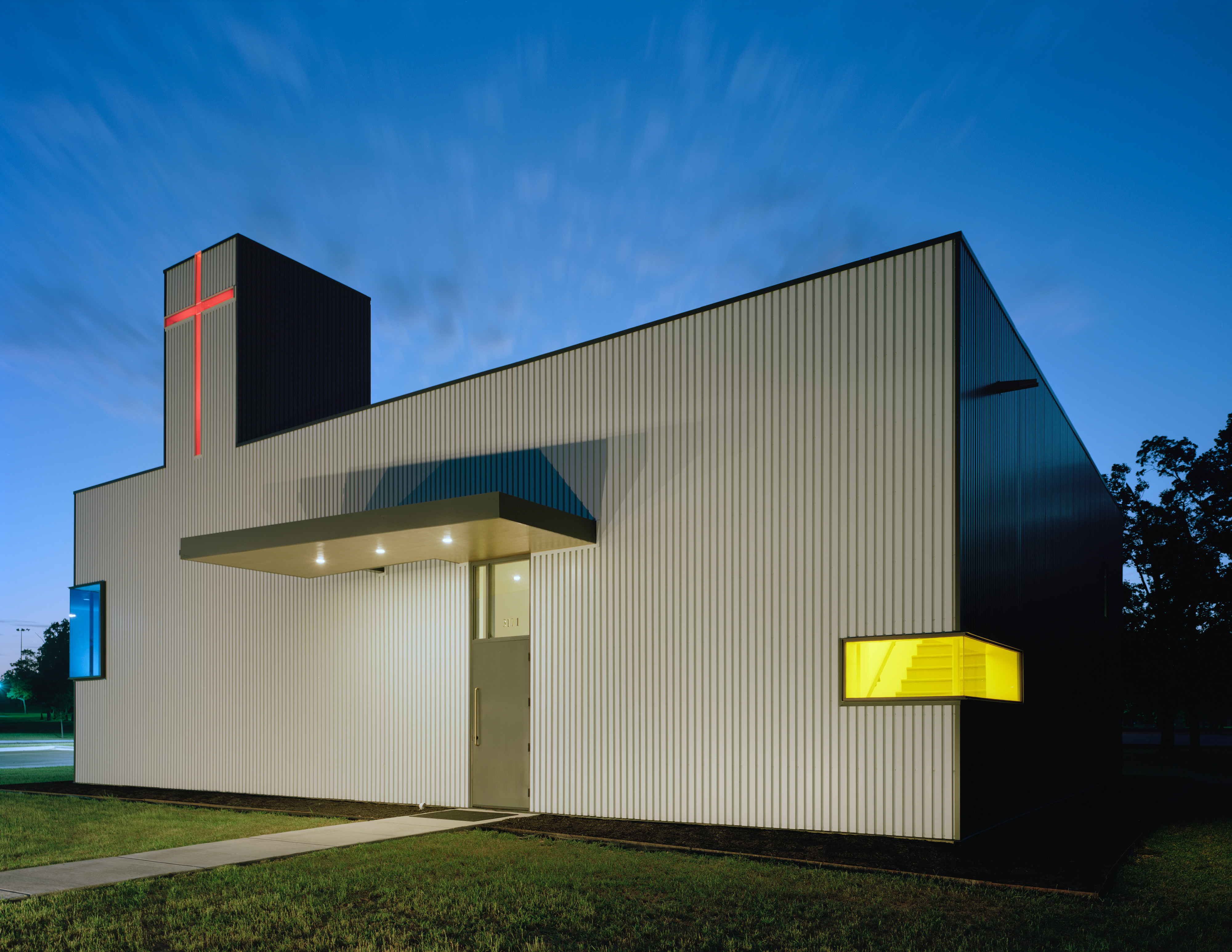 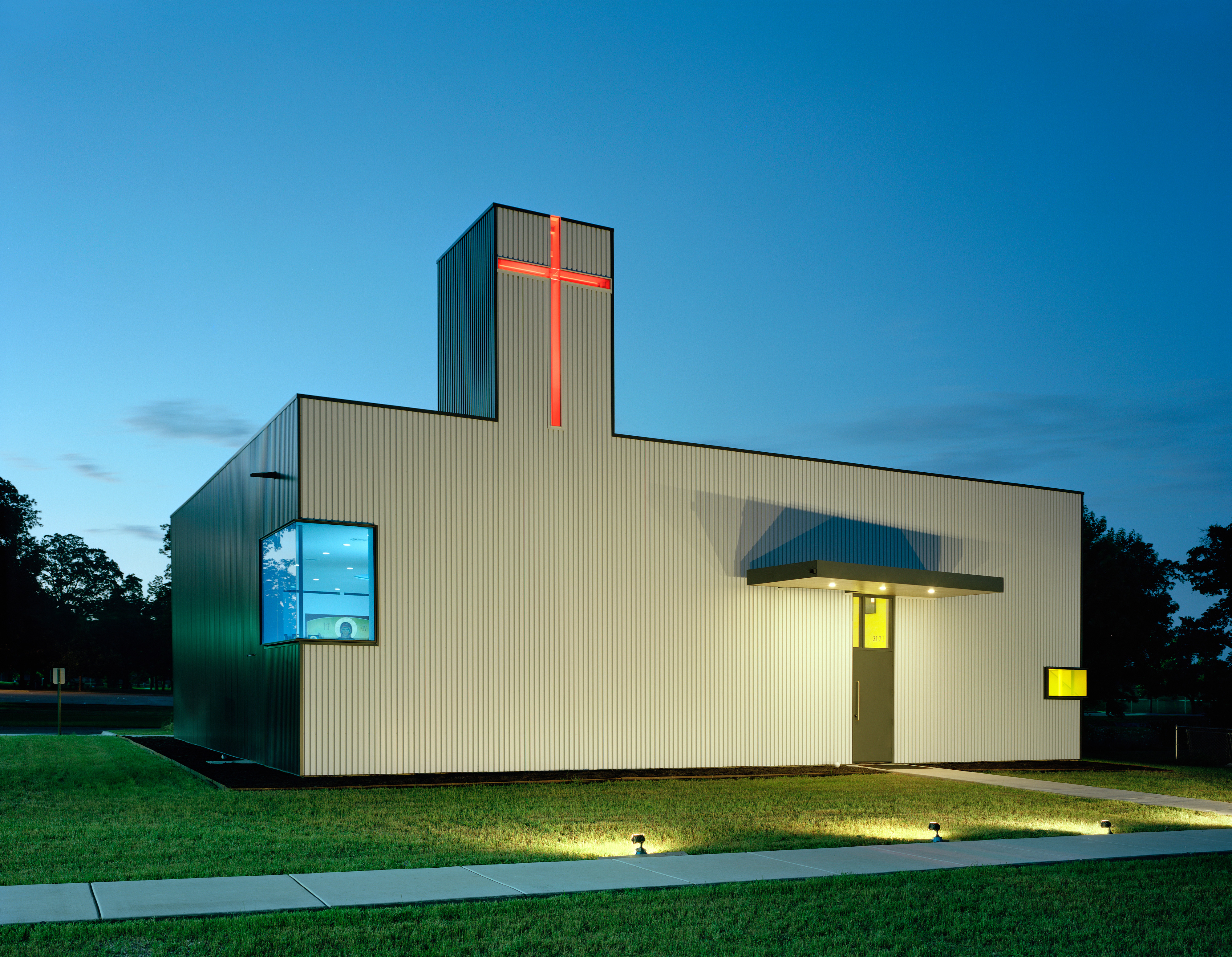